We take the NOFA Farmer's Pledge to define and prove our commitment to organic farming practices. 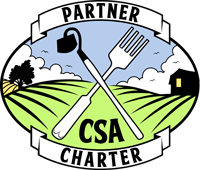 We endorse the CSA Charter; look for this logo to make sure you're signing up for a real CSA!

Hi folks, Farmer Ruth here! Here's some info on how Mud Creek Farm came to be.

I grew up in Cabot VT, surrounded by dairy farms. My parents had a flower farm when I was a kid, as well as a large garden where I was often sent to graze when I wanted a snack. As I grew older I had many different kinds of jobs, and I ended up going to art school, but I always loved working with my hands more than sitting at a desk. A few years after school, I went traveling in New Zealand for six months, living and and working on several different organic farms, and it reminded me how much I love to grow things. When I came back to the states, I moved next door to my dad on the land where I grew up to help him and his partner start a vegetable farm where the old flower fields had been. Then I migrated to the Rochester area, and worked at Peacework Farm CSA for four years. They were one of the first CSA's in the country, and a great introduction for me to the CSA way of farming. I fell in love with it, and decided I'd found what I wanted to do with my life.

Mud Creek Farm was founded in 2009 by Erin Bullock, on McMahon Rd. in Victor. She started with 80 members that first year, and over the next few years she improved the soil and grew the farm to about 300 members. In 2013 I worked for Erin as her assistant manager. By the end of the season, Erin had decided to move on to further adventures, and I decided to buy the business from her.

At the same time that Erin was deciding to move on, I was also looking for new land for the farm, since the old lease on McMahon Rd. was falling through. After months of searching, I found our current spot on Cherry Street, and it turned out to be our new home. The first year was a lot of work, as the land was merely a sea of weeds, and we had to introduce all new infrastructure and start to improve the soils. Each year brings new challenges, but also brings more of a sense of home as we settle in and put down roots, literally. We are making things better and better each year, and we're happy to have you join us!